When you read the guide books on Barcelona they always highlight La Rambla, a long pedestrian walkway filled with restaurants, shops and kiosks and warn you of the potential pickpockets. While it is a nice walk, it is also quite touristy. My personal preference, if you really want to get a feel for what the locals do on a leisurely Sunday afternoon, is to stroll El Poblenou.

With that as our destination, we set off and almost immediately encountered a friendly but competitive neighborhood bocce ball tournament.

Bocce ball is something of a national pastime in Spain but I’ll be honest that this was the first time I’ve seen women playing the sport. While they were obviously enjoying themselves, make no mistake, this was competitive! With the sound of balls gently knocking into each other amid hearty cheers or groans, we continued down the street and soon reached the top of the Poblenou area.

It was quite crowded, full of families pushing strollers, children on bikes and young folks meeting up for a drink or lunch. Not two blocks in, we encountered a small stage surrounded by children. Music was playing and as we approached a young man started blasting the audience with a soap bubble canon! 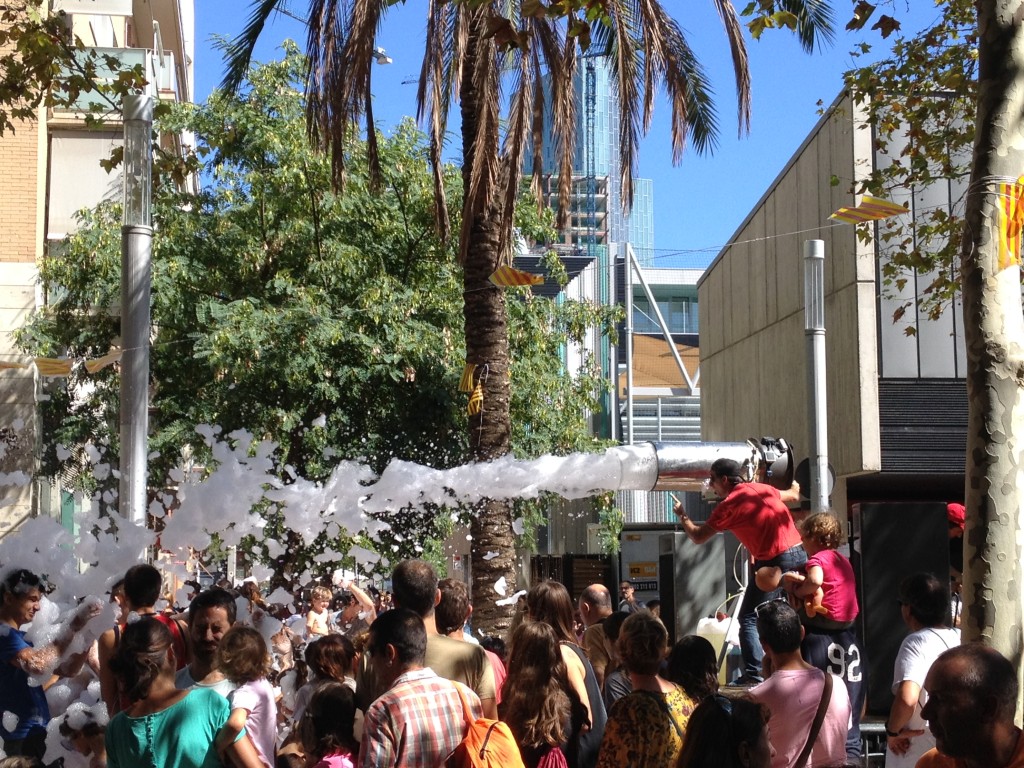 On such a warm day, this was the perfect way to cool down without getting completely wet! Children ran around in their bathing suits and the adults were laughing and enjoying the sheer joy of such a silly idea. 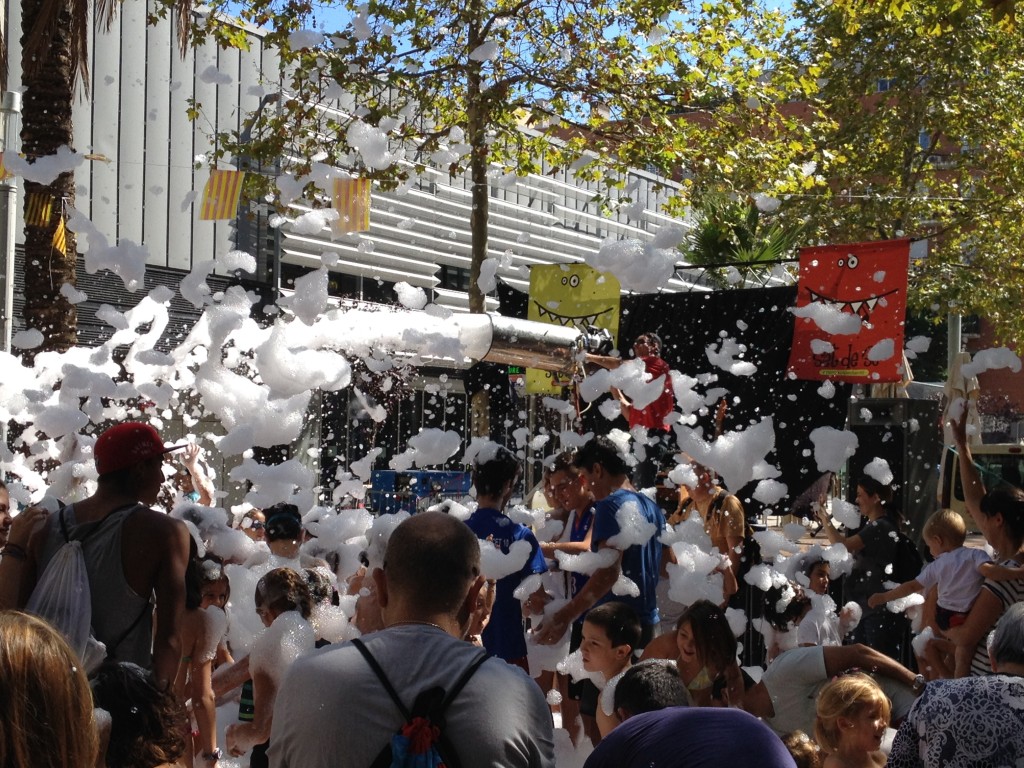 Continuing down the street, there was yet another crowd gathered around a team competition in the Catalonian tradition of the Castell or human pyramids. Built with the strongest and largest folks at the bottom and the youngest, lightest (usually children) scrambling to the top, this is a nerve wracking and thrilling thing to witness. 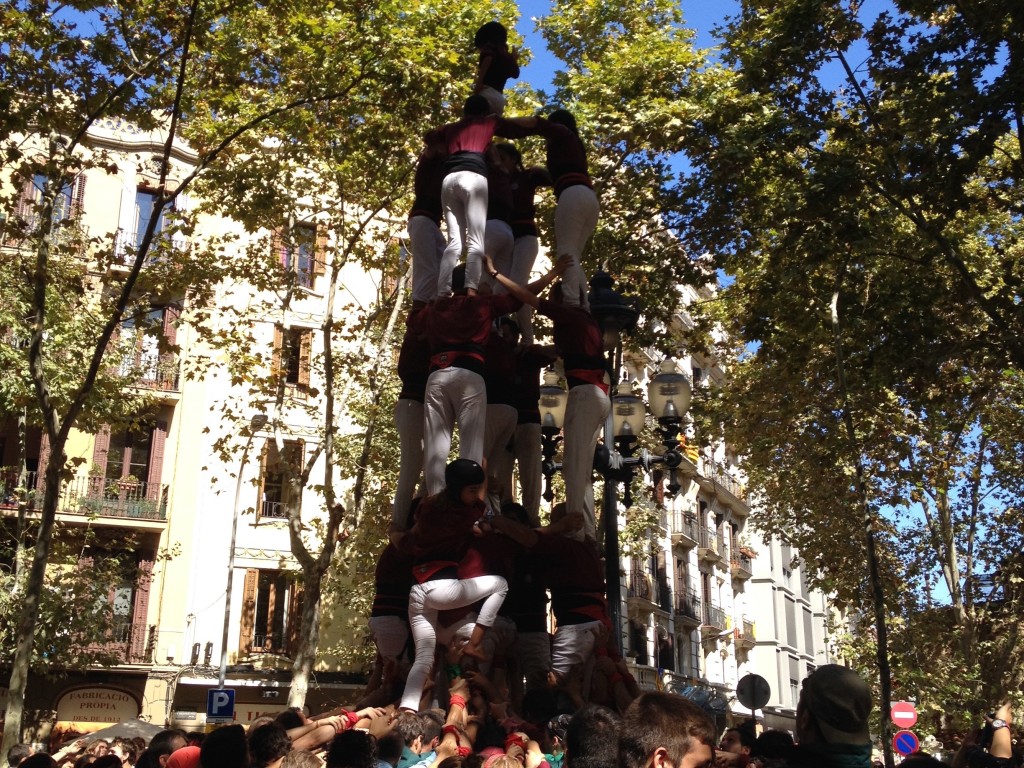 I can hear you asking, how could you let young children do that? Well to be fair, they did wear helmets and there was an ambulance parked on the side of the road.  And while there wasn’t a safety net, there were enough people crowded around to break any serious fall. In any case, I could only stand watching one of these teams as my heart was pounding so hard I couldn’t take it! It was wonderful to see the pride and excitement of the crowd. For those castellers that have been raised in this tradition, this carried all the weight of competitive sport with the thrill of live performance. And speaking of live performance . . .

On the next block we were treated to the Gigantes Parade. Oversized characters, live musicians and well known stories like St. George fighting the wicked dragon, make this a fun show to watch. I took a video of this Gigantes play because I’d never seen a lady dragon portrayed in quite this manner before!

So by now I was wondering if we had run into another “happy accident” in our travels. And sure enough, we had. Remember how much they love their festivals in Spain? Well, this weekend was the La Merce Festival, the largest street festival in Barcelona. What a delightful surprise! With so much activity to digest and a hunger to satisfy, we sat down for some paella and sangria at a lovely outdoor cafe. It was here that I saw my favorite image of the day: a very elderly couple walking hand-in-hand with a perfectly timed cadence that can only come with decades of practice with the love of your life in your family-filled neighborhood. It was simple. It was comforting. It made my heart happy. I’ll take the life and energy of Poblenou over La Rambla any day.

As we came to the beach at the end of the Poblenou, I had to admit how much I love Barcelona and their lifestyle. Any city that builds permanent recliners to enjoy the sun and watch the sea is all right in my book. While I’m off to the next city, I know I’ll return to this magical artistic city in the future. 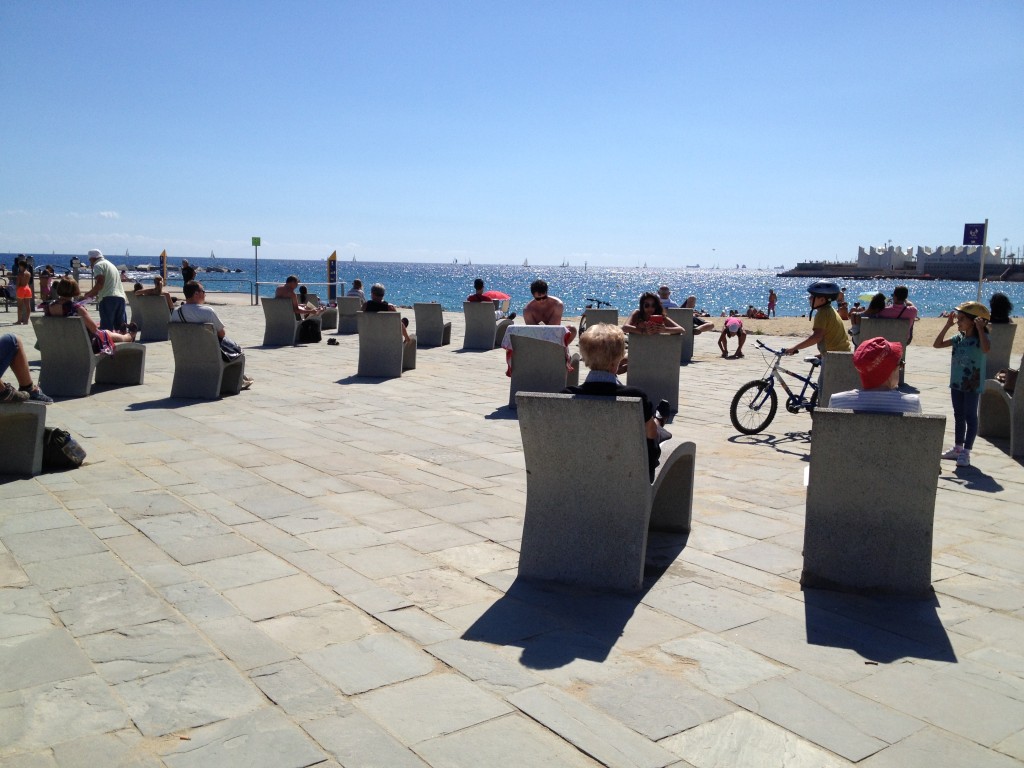