As I was planning the logistics to and from the airport for my trip to Scottsdale, I was reminded of a story that happened a few years back. For those of you too young to know, it used to be standard practice to have my designated person (usually a family member or friend) park their car, walk into the airport and meet me at the gate, complete with a big hug and an offer to carry my luggage. As security became a necessary way of life and the ubiquity of mobile phones emerged, I now call my person when I’m getting off the plane and meet them outside at the arrivals sign for what I think of as the drive-by pickup. Simple, quick and easy. A vastly efficient improvement, right? What could possibly go wrong? Well, I’ll tell you.

I travel to Phoenix quite often to visit my family and usually my dad is the one to pick me up. On this particular occasion, there was an exception to that rule and my brother was given the task to come get me. Simple enough. I called him on his cell when I was outside under the #4 American airlines sign. He quickly called me back saying he saw me and was actually right behind me in the white pickup truck. 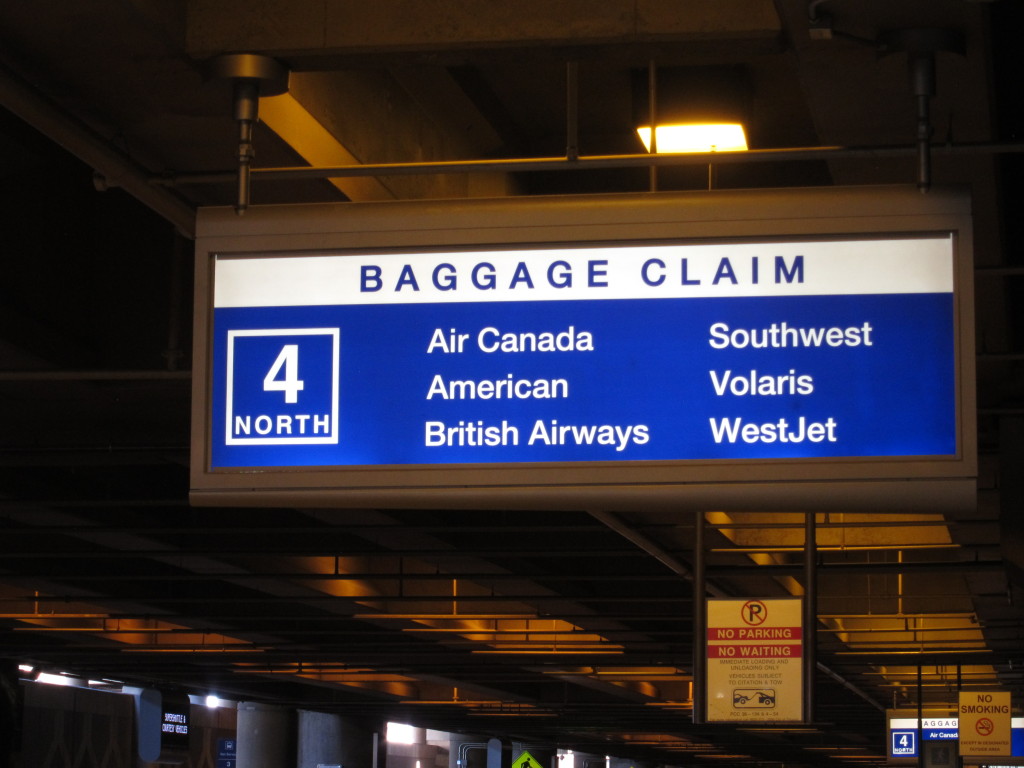 Sure ‘nuff, I turned around and trundled over to the double cab extended white truck, opened the front door to throw in my purse and the back door to stuff my luggage and laptop bag behind the seat. As is my way, I was chattering about how hot it was and how I needed to get home to take off my clothes ASAP and how I had great presents that I thought he’d really enjoy . . . you get the idea. With the last bag loaded, I realized he hadn’t said anything. So I looked up to see the driver of the truck looking at me.

“You’re not my sister but sweetie, I’ll take you wherever you want to go,” said a good-looking man with a lop-sided grin.

I know I should have stopped there but what came out of my mouth was, “Well, where you goin’?”

Now this wasn’t your normal pause. It felt more like a Harold Pinter pause, filled with possibilities, rejection of those possibilities, temptations, emotional wanderings, a tug on my gypsy soul and finally, a rational decision.

“Ah, wrong direction. Besides what would your sister think?” I say out loud.

“And where the hell is my brother?” my brain is just now beginning to wonder.

With that, I extricated my luggage from his truck with as much grace and dignity I could muster, thanked him for his kind offer and as I quietly closed both the doors I heard a gentle chuckle and what might have been a sigh.

As I trundled down the walkway, my phone was ringing with what felt like some urgency. It was my brother who had apparently witnessed this entire exchange – from three car lengths down and one lane over! As I looked up, I realized there had to be at least 6 other white pickup trucks waiting in line. I think a careful statistical study will bear out that Phoenix has one of the highest concentrations of white pickup trucks in the country, so I’ve decided this was not my fault at all but just a weird law of averages that at some point I would get into the wrong truck. Our drive home entailed a very interesting and lively discussion of what, exactly, the phrase “I’m right behind you” means, especially in a sea of Arizona white pickup trucks.

Of course, this story has become legend in my family with no end of teasing but it took my perceptive and funny nephew to point out that while this was a great story, he wondered what that poor man was telling his sister and his family when he got home from the airport!

Have my dad pick me up in their easily identified white Buick with the license plate holder that says, “Small is beautiful”. Oh, and maybe next time I should pause just a little longer to get the phone number of the mysterious man in the truck.