It’s been 72 hours since Donald Trump was elected the 45th President of the United States and I’m still a goopy mess. My stomach hurts, my heart feels like a lead weight has been tied to it, my brain just can’t seem to wrap itself around the idea that my country believes in this man and every once in a while, I feel something like panic set in. Most importantly, I feel like there is a stranglehold, not just on my heart, but also on my voice.

I’ve asked myself why I’m so sad. I know I live in the bluest of the blue; between San Francisco and Silicon Valley where values of acceptance, diversity, freedom of expression, equality and open discourse strive to be modeled as best we can. I’ve chosen to raise my two children here precisely because of those values. I’ve had the opportunity to contribute to the success of large global companies because I was valued for my quirky, unique expression. I’ve become a better version of myself because of the diversity of my friends. I’ve believed that open discourse for the good of the people would always provide a positive path forward.

Many people are pointing to this man who has tapped into and promoted beliefs of sexual abuse toward women, violence and bigotry as if it were just him. That isn’t what frightens me. What truly frightens me is that his message and his behavior has unleashed permission for those that think like him, to act like him.

That large red map filling my TV screen has now filled my psyche and for the first time in my life I find myself wary to travel to those areas that have so fully embraced his message . . . in my own country. For an independent woman, who has traveled to many parts of world by herself, without fear and intimidation, that is a desperately sad statement.

I’m in mourning. I need time. I need a hug . . . lots of them. I need those around me to understand this isn’t just a passing thing. It has deeply affected me and it has shaken my faith in the American people and my belief in our future.

Being a child of the 60’s, what hasn’t been shaken is my belief that action can spur change. Living in fear and disgust is not how I choose to live my life. I don’t know what that means today but as I look around me, I’m so encouraged by the young women in my life (yes, you Angelica and Jessica) that are taking a stand and choosing to speak out. I will join them and together we will work to make our country one where we can raise our children and grandchildren with pride and hope.

As I write this, I find solace in my pot of tea and remember a favorite quote.

“Women are like teabags, you never know their strength until they’re in hot water.”

Bring on the heat. 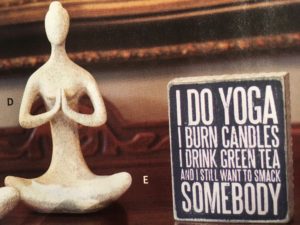