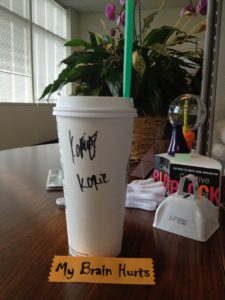 I grew up spelling my name. Every first day of school, I would sit in class with my heart beating out of my chest and my stomach twisting, waiting for the teacher to get to the “P” portion of the roll call, dreading the inevitable calling out of my name.

“Here, but it’s not Karen, it’s Koren,” I say meekly and quietly. The very last thing I want is to draw attention to myself. I’m the shyest kid on the planet, big for my age, haven’t quite yet figured out I need glasses and absolutely know braces aren’t too far in the future.

“Koren?” She pauses. “How do you spell that?” I’m in first grade but I sure know how to spell my name and how to explain it.

“Can you spell that again?” Clearly, she’s never heard a name like this before and the mental gyration’s I’m asking her to go through, this early in the morning and this early in the school year, are clearly hurting her head.

“K-O-R-E-N.” By now heads are turning. I’ve stopped the flow of roll call and everyone is looking at the kid with the weird name.

“Ok, Koren . . .” The pause indicates she’s got more questions but needs to move on. Unfortunately, we aren’t done with this yet. I take a deep breath.

“My nickname is Korie. Koren is my formal name but everyone calls me Korie.”

“So, is that C-O-R-E-Y?” Why would a teacher of the English language think a name that starts with a K, suddenly switches to starting with a C? I know English is weird but not that weird. Even at age six, I know this.

This repeats itself every day until I either give up and get called Karen all year or people get that I’m Koren, but never Korie. This really isn’t so bad until I get to the age when I change classes for every subject, so yes, you guessed it, I rinse and repeat this conversation for each of them.

Why, oh, why did my parents think this was a good idea? Did they want me to be an early speller? Did they think I would love being the center of attention on the first day of class every year? The story they told me is that they liked Karie as a nickname but didn’t like Karen as a formal name, so somewhere they saw Koren and liked the nickname Korie. Nicknames obviously took precedence over formal names in our house. My brother’s name is Michael, Mike for short, but his nickname for years was Butch. Go figure.

Where did this fixation with nicknames come from? When my dad was in the hospital before he passed away, I had to go through his high school yearbook to respond to one of his friends who was writing a book. As I looked through the pages, I realized everyone, and I mean everyone, had a nickname. Bucky, Huppy, Twink, Bugs, Digger, Gigs, Inky, and my personal favorite, Gawge. As Dad looked through the book he said, “There are some people here, who I never knew their real name. We always used their nicknames.” And he certainly didn’t know the names of any younger siblings as he said “Oh, that’s Bucky’s brother Fibber.” Neither of those were their given names.

Dad’s nickname was “Red” while he was growing up because of his auburn hair, but the one that stuck in high school was “West Point.” This was news to me. Why “West Point”? He didn’t go there for college. In fact, he never went to college and by all accounts was not fond of his forced Army experience during the Korean War.

Well, apparently, my dad was not just a baseball star, which I knew, but also a soccer star. His little Verona, New Jersey high school had the opportunity to play the West Point plebe team in a soccer match, and guess who scored the only point in a sudden death tie breaker to win the game? My dad. Forever after to be known as “West Point” Pelka. I was 61 years old before I ever heard that story, and it’s a good one.

I heard more stories like that over the months of his illness, and I have so many more questions now that will never get answered. I should have sat with that yearbook and asked for stories about each of those silly nicknames. The richness of the era, the endearing antics that earned the nickname, the true affection bestowed as a badge of honor. That’s the importance of nicknames. They create ties that bind you to the person, connections to shared experiences, chosen with love and laughter.

So, dear friends, if you have questions for your loved ones, go ask them NOW. Listen to the stories and ask for more. Parents: create your legacy for your children and share it with them, so they have a true sense of who you are, not just as a parent, but as a person.

Maybe even a person with a few silly nicknames.

I’ve come to embrace my name. I now love that it’s different and unique. I can get a gmail account and domain name without adding a gazillion numbers after it. I’ve learned to pause when I spell my name for the barista and accept that my cup will always have a C crossed out with a K scribbled over it. I’m Korie and I have stories yet to tell about nicknames I’ve yet to earn and nicknames yet to give to all those I love.