For the latest adventures of Lisa and Korie, we decided to visit Nashville. Well, I’m here to tell you, Music City lives up to its name, y’all! We spent three and half days, mid-week in July and loved every minute of it, despite the heat and humidity. Here are some highlights: 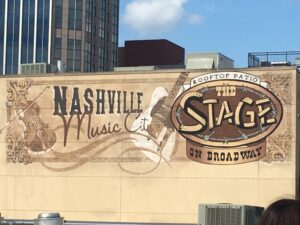 This is the land of large guitar statues on every corner, so it seemed appropriate that we heard a cacophony of rock, country, bluegrass and blues as we approached Broadway Avenue. The entire street was rocking at noon on a Tuesday, with open windows packed so tight with drum kits that we saw a drummer crawl in from outside the building. Strolling down the street we passed what they advertise as honky-tonks, which weren’t the down and out, seedy kind I envisioned. Instead, they were restaurants and bars built like layer cakes of bands and singers – each floor featuring deliciously talented bands or solo artists, all singing their hearts out in hopes of being discovered. It’s brilliant, really. A music lover’s dream. By the time we made our way to the rooftop bar at Tootsie’s,  I thought how crazy it must be on the weekend . . . and I could stay here for way longer than a few days. 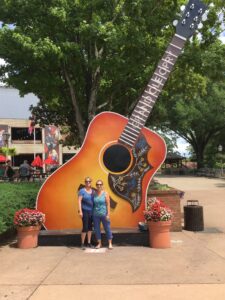 We had to visit the iconic Grand Ole Opry, of course, so we started with the backstage tour. Considering we knew next to nothing about country music, this was a great way to discover the history of this 93-year-old institution. They take you through all the unique dressing rooms and even allow you on stage, where you can stand in the hallowed “circle” center stage – a circle that has been unbroken for years. 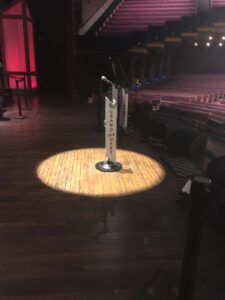 As is our way, we often luck into what I call “happy accidents” – unplanned experiences that are incredibly special and memorable. I’d gotten tickets months in advance based on availability of the nights we would be there. Well, apparently, we chose the night that Luke Combs was to be inducted as the 68thmember of the Grand Ole Opry! Who knew? I sheepishly admit we had no idea who Luke Combs was until that night. His induction brought out a stellar lineup featuring The Gatlin Brothers, Craig Morgan, Chris Janson, Mark Wills, Joe Diffie, Kelsea Ballerini and Vince Gill. 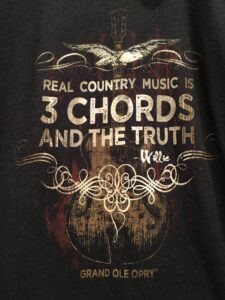 As for the show, it was incredible. It opened with the Gatlin Brothers performing an impromptu version of “O Canada” for all the Canadians in attendance. Who would have expected that to occur at a country music concert? I have video of Lisa standing and singing loud and proud!

Willie Nelson famously said, “Real country music is three chords and the truth.” And there was a whole lot of truth goin’ round that night. Truth about the loss of a son. Truth that honored a father’s legacy. Truth about accepting differences in others. Truth about the lust for a woman, a boat and a truck, not necessarily in that order.

As the audience sang along, I felt completely clueless but quickly got over any shyness, after all, it wasn’t hard to figure out the refrain to Beer Never Broke My Heart! It was a night filled with tears, laughter and amazement at the super high quality of every musician. There wasn’t a bad seat in the house, so I encourage you to just go. Go and experience amazing music.

We’d heard about the Ryman and again, we had a happy accident, this time in the form of an annual charity event in support of music education, featuring more than 15 different artists backed by the phenomenal Peach Pickers band. The evening opened my eyes (and ears) to so many talented performers. But the real surprise was the special honor they gave to Whisperin’ Bill Anderson, a legend in the country music business (again, who knew?). His duet of Give it Away, with Jamey Johnson and Jamey’s version of Georgia on my Mind  brought down the house.

In addition to our musical evenings, we visited the Country Music Hall of Fame and Museum which was really well done and a welcome relief from the oppressing heat. We also did a day tour of Belle Meade and Andrew Jackson’s plantation, gaining insight into a bit of regional history.

Our last day included breakfast at the Union Station Hotel, which I highly recommend for the food as well as the renovated architecture. It’s literally across the parking lot from the Frist Museum which featured a lovely exhibition of Frida Kahlo and Diego Rivera. 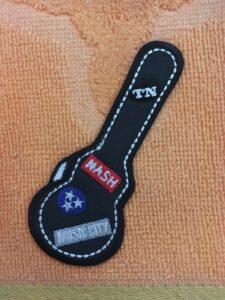 As we headed to the airport, we reflected on our good luck and great experiences. In unison, we turned to each other and agreed we could hear my dad saying, “If you girls knew what you were doing, you’d be dangerous.” Indeed we would!

So, another year, another adventure and another patch for our traveling orange towel.